As a project manager and coordinator of various teams I had always to do with the topic named stress. It is a common sense that the word project is bound to the word stress and they build a couple that is present in every project. You will hear such sentences like “it was stressful”, “we had too much stress” etc. during almost every review or retrospective meeting.

Actually the stress in a project is not the problem. It will always be present and it has also its good side effects. The problem is the stress strength and its effect on the project team members. If the stress strength achieves the threshold of unhealthy stress strength or even exceeds it, it will cause valuable damages to the team, thus to the entire project. Additionally this threshold exceedance may occur at the end of a project, especially between end of the build phase and start of the run phase, where the project is very fragile, so you won’t get any chance to react and repair any damages. As a result the project may encounter a serious problem to close successfully. Let explain me this based on the following diagram: 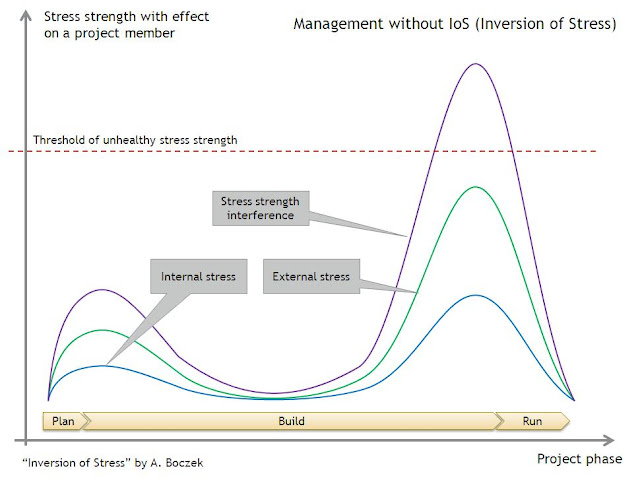 As you can see we have three curves. The internal stress curve depicts the stress level caused by the internal characteristics of every project member. We are all humans. You can also understand it as the excitement curve. At the beginning of a project, during transition between the plan and build phases, every member of a project team is excited to some extent. During the build phase the stress strength is quite low, and explodes at the end of the project. “We are going live!”.

What is however really important is the fact that these two curves interfere and build the stress strength interference curve, which values can suddenly reach the threshold of unhealthy stress strength.

Unhealthy stress strength is simply… unhealthy. The most common symptom of it is the disintegration of the team, thus the transition from the team to the group of individuals.

To avoid such situation, I have introduced in my latest two projects a method named Inversion of Stress (IoS). This name might not be the perfect one for that solution but nowadays everyone would like to have something based on iOS, me too, so I have invented the IoS :)… Ok, back to business.

The only curve a project manager or a coordinator has influence on, is the external stress curve. Knowing that its normal behavior means high stress strength at the end of the project I have decided to simulate this behavior… at the beginning of the project. That is the inversion. The aim was to recognize where the threshold of unhealthy stress strength is. 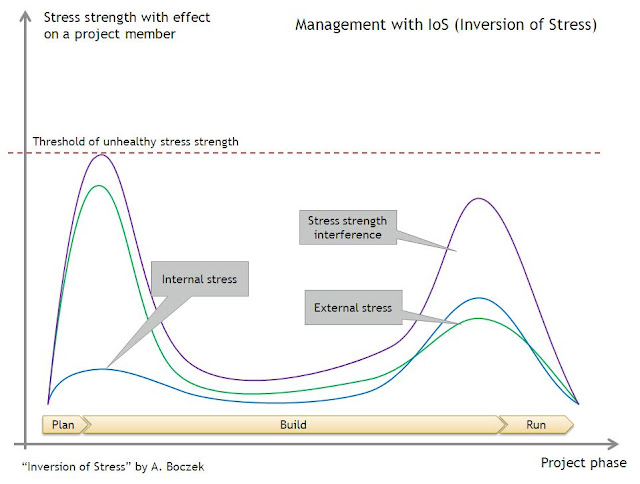 How to achieve this goal? It is not so complicated but requires some good discipline and observations skills. Here a proposal of actions that can increase the stress strength at the beginning of a project:
•    Introduction of strong risk management
•    Introduction of effort tracking system
•    “Healthy” micro management (“drugs under control”)
•    Introduction of code reviews
•    Involvement of testers and operators in the project

Due to the fact that these actions were introduced under my strict control I was able exactly to observe the results and to avoid the risks of the exceedance of the threshold of unhealthy stress strength at the end of the project.
I wasn’t also afraid of consequences reaching the threshold, because I had always had time to reduce the stress strength again and to repair the caused damages. Additionally I have gained a lot of acceptance from the team, as the person “who can listen to the team”, “who is there to protect them”! Wow...
---

Coding Serbia 2014 and My Talk about Agile Culture Capability Model